The goal of the present work is to study numerically perturbed convective hydromagnetic regimes, whose periods in horizontal directions are 1-4 times larger than that of the MHD state that we perturb. We find that the scale ratio 1:4 is still too large for the perturbations to be consistent with the asymptotic behaviour observed ibid. The nonlinear magnetic field generation remains sustained only in the elongated periodicity cells, where the period in one horizontal direction is the same as in the unperturbed MHD steady state, and in the complementary direction it 2-4 times larger. All the computed attractors are chaotic, except for the attractor in the triple-period elongated fluid cells. Two distinct MHD attractors are identified in the double-period elongated cells and just a single one in quadruple-period cells, in these cells no hydrodynamic attractors have been found with a magnetic field decaying indefinitely.

Estimates of the magnetic Reynolds number as well as the behaviour of the mean kinetic helicity of the flow do not distinguish between generating and non-generating triple-period attractors in elongated cells. In “wide” periodicity cells, where both periods in the horizontal direction are at least twice larger than that of the MHD state subjected to perturbation, the characteristic length scales shorten to a fraction of the period of the initial state, and convection becomes less vigorous, resulting in the cessation of magnetic field generation. 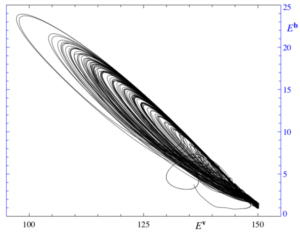