For the past 30 years, the M8 medium-term earthquake prediction algorithm has been applied globally every six months in real time for identifying the areas where the world’s strongest earthquakes are most likely to occur. As of now, the statistics of the outcomes observed in the Global Test with a confidence exceeding 99% indicates fairly high efficiency of the forecasts based on the M8 algorithm and those based on its combination with the MSc algorithm which more accurately localizes the focal zone of the expected earthquake. Thus, the null hypothesis of random occurrence in seismically active areas is rejected with seismologically certainty at least for the world’s strongest earthquakes in the magnitude ranges 8.0+ and 7.5+. The results of this experimental testing indirectly confirm the predictability of the strong earthquakes and the existence of both the common dynamic characteristics and diverse behavior during phase transitions in a complex hierarchical nonlinear fault-and-block system in the Earth’s lithosphere. 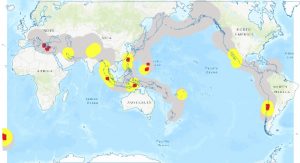 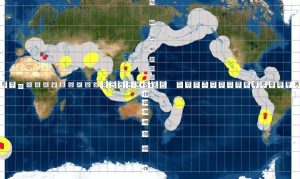 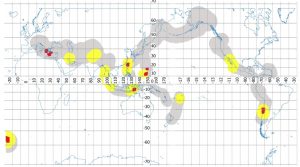 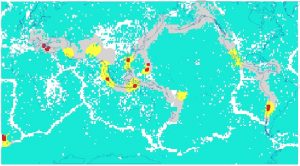 “Lineaments and places of possible strongest earthquakes’ occurrence” project summarizes the results on the recognition of places of strong earthquakes’ possible occurrence within Italian region [Gorshkov et al., 2002, 2003, 2004, 2009]. The studies have shown that strong earthquakes confined to the intersections of tectonically active fault zones – morphostructural nodes. Location of nodes is determined by the method of morphostructural zoning. The pattern recognition algorithms are performing classification of nodes by seismic hazard degree. 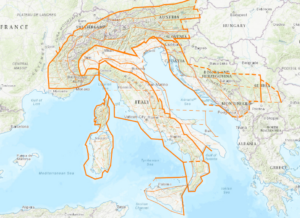 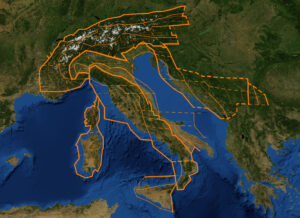 The highly seismic Black-Sea–Caspian region contains conjugate mountain edifices of the Caucasus, Alborz, and Kopet Dagh, the Rioni and Kura intermontane troughs, and the deep southern Caspian basin. Potential sites of larger (М ≥ 7.0) earthquakes in the region have been defined by (Novikova and Gorshkov, 2018). This was done using the methodology designed for identification of sites of possible large earthquakes. The earthquake-generating features are considered to be intersections of morphostructural lineaments as identified by morphostructural zoning. The epicenters of М ≥ 7.0 earthquakes correlate with lineament intersections. The Kora-3 pattern recognition algorithm was used to separate all intersections in the region into high- and low-seismicity ones with respect to М ≥ 7.0 based on the geological and geomorphologic parameters that characterize vicinities of intersections. The result was to recognize 150 intersections as having potential for М ≥ 7.0 earthquakes of a total of 510 intersections that were found in the region by morphostructural zoning. All of these intersections are within mountain belts. No intersections that can generate М ≥ 7.0 earthquakes have been identified in the intermontane troughs and within the southern Caspian deep-sea basin, whose crust is thinner. According to the geological and geomorphologic features of high seismicity intersections, as identified here, they are characterized by high contrasts in neotectonic movements and increased crustal fragmentation.

The French Massif Central, located within the West European platform, is characterized by a moderate level of seismicity. Seismogenic nodes capable of generating Io ≥ VI earthquakes were identified within it using a phenomenological approach based on pattern recognition. Recognition objects – morphostructural nodes – are identified using the morphostructural zoning method allowing to delineate the hierarchical block structure of the region, represented by a system of morphostructural blocks, by lineaments limiting them, and nodes that are formed at the intersection of lineaments. The epicenters of earthquakes Io ≥ VI are confined to some nodes. The CORA-3 recognition algorithm has identified other nodes where earthquakes of this intensity have not yet been registered. Recognized seismogenic nodes are located mainly in the eastern part of the massif and correlate with lineaments of higher ranks separating the largest blocks. As a result, information was obtained on potential sources of earthquakes, which is very important for a long-term assessment of seismic hazard.