The present manuscript «Equations of state of clino‑ and orthoenstatite and phase relations in the MgSiO3 system at pressures up to 12 GPa and high temperatures» was published in the journal «Physics and Chemistry of Minerals» (Web of Science Q2, Scopus Q2, Impact Factor: 1.748), Springer Publishing. This is a joint work of scientists of ITPZ RAS and IZK SB RAS (Irkutsk) from the team of authors Tatiana Sergeevna Sokolova, Peter Ivanovich Dorogokupets and Alona Igorevna Filippova.

The equations of state of three phases in the MgSiO3 system (low-pressure clinoenstatite, orthoenstatite and high-pressure clinoenstatite) were constructed within the framework of the original thermodynamic model based on the Helmholtz free energy and a complete set of their thermodynamic properties (entropy, heat capacity, bulk moduli, thermal expansion, Gibbs energy, etc.) was calculated for given P-T parameters. To perform calculations and the convenience of users, open working MS Excel spreadsheets for each of minerals were also presented as Supplementary Information to the present manuscript. The phase relations in the MgSiO3 system are obtained based on the estimated Gibbs energy for studied phases and clarify other calculated data under the upper mantle conditions at pressures up to 12 GPa and temperatures up to 2000 K.

Isotropic compressional (P) and shear (S) wave velocities of orthoenstatite and high-pressure clinoenstatite at different pressures are calculated based on the obtained equations of state. The calculated jumps of P- and S-wave velocities of orthoenstatite → high-pressure clinoenstatite phase transition at pressure of ~9 GPa are 0.7% and 5.1%, respectively, which is in good agreement with the estimates of other authors. The calculated jump of density of this phase transition at the depth of ~250 km and at a pressure of 8 GPa is 2.9%. The obtained results are jointly used by us to discuss the location of the seismic boundary, named «X-discontinuity», at the depths of 250–340 km, which is often associated with phase boundaries in enstatite. 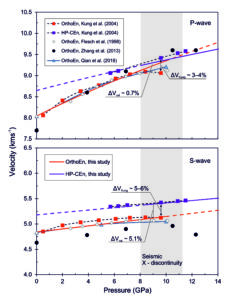 Fig. 1. Calculated P- and S-wave velocities for orthoenstatite and high-pressure clinoenstatite as a function of pressure at ambient temperature (T = 298.15 K). The calculated jumps of velocities, associated with the OrthoEn → HP-CEn phase transition at the pressure of  ~ 9 GPa, is 0.7% for P-wave and 5.1% for S-wave. The location of the seismic «X-discontinuity» is shown with the shaded region.