Skip to content
The 11 April 2012, M8.6 and M8.2 earthquakes OFF THE WEST COAST OF NORTHERN SUMATRA did confirm an alarm TIP reported in January, in the regular 2010a Update of the M8-MSc predictions of the Global Test of M8 (Healy et al. 1992; password protected URL http://www.mitp.ru/en/restricted_global/2012a/2012am8.html; yellow outline in the attached figure). The earthquake epicenters missed the reduced area of alarm (red outline) diagnosed in the second approximation due to inapplicability of the MSc algorithm outside bulk distribution of seismic activity. Nevertheless, it appears remarkable that the reduced area is about the same as the area of the 11 April 2012 first-day aftershocks located at about the same latitudes. The 11 April 2012 great earthquakes have ruptured the conjugate faults, about 300 and 500 km each in the oceanic lithosphere of Indo-Australian plate. Both are strike-slip intra-oceanic-plate events with epicenters in an area of sparse seismicity, some 100 km and 200 km to the southwest of the major seismic belt of the subduction zone next to the complex junction of India, Australia, Sunda, and Burma plates. These events continue a series that can be attributed to the 26 December 2004, M9.1 Sumatra-Andaman mega-thrust, followed by the 28 March 2005, M8.6 great Nias earthquake. In course the Global Test of M8 a segment of the subduction zone from Burma to Southern Sumatra was recognized as capable of producing magnitude M8.0+ event starting from July 2005-January 2006, which prediction was already confirmed with a pair of the great 12 September 2007, M8.5 SOUTHERN SUMATRA and M8.1 KEPULAUAN MENTAWAI REGION, INDONESIA earthquakes (http://www.mitp.ru/en/restricted_global/2007b/m8t5confirmed.html). (Note: The M8 algorithm provides prediction in the first approximation, and the algorithm MSc, if the data permit, narrows down the area covered by alarm. Both apply to the null approximation delivered by identifying earthquake-prone zones, e.g. “active fault zones”, “D-intersections or knots”, etc.) 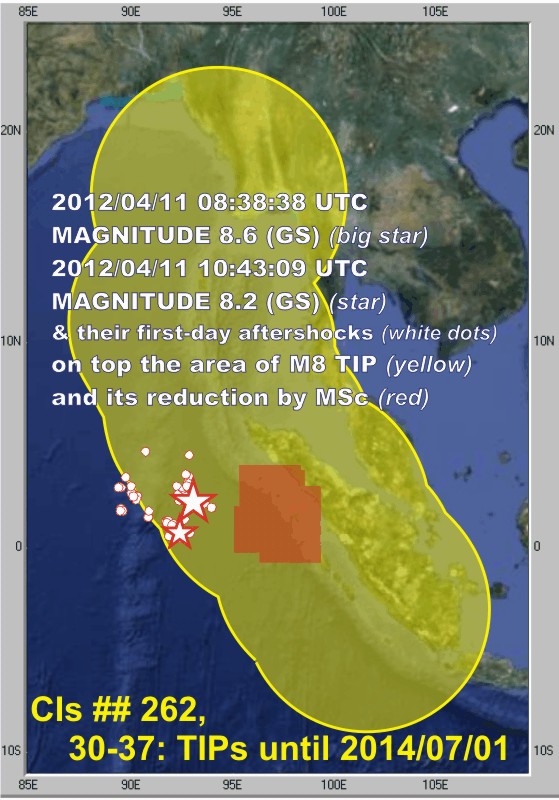