Skip to content
The algorithm CN is applied in Italy using the regionalization based on the seismotectonic model proposed by Peresan et al. (1999). The forward prediction is routinely 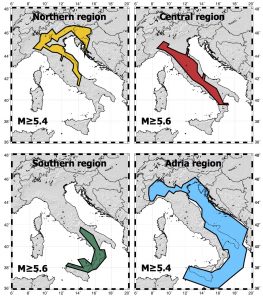 performed every two months, using the catalogue UCI2001 (Peresan et al., 2002), which is updated using the NEIC Preliminary Determinations of Epicenters (Peresan & Rotwain, 1998) since 1986. The thresholds M0 for the selection of the Strong Earthquakes are fixed, according to their average return period, to M0 =5.4 for the Northern region and to M0 =5.6 for the Central and Southern regions. Details about CN application in Italy can be found in Peresan et al., (1999). Experiments in retrospective simulation of prediction have been performed considering the time interval where the catalogue in sufficiently complete for the application of the algorithm CN (that is Jan.1954 – Dec. 1997, for the Central and Southern regions, and Jan . 1964 – Dec. 1997, for the Nothern region). Results of forward predictions are routinely provided since January 1998. Maps of the regions considered for CN monitoring in Italy and Adria Region.