Skip to content
According to the USGS/NEIC on-line Earthquake Archive Search of the ANSS Comprehensive Catalog in the first half of 2014 there were four earthquakes from the magnitude range M7.5+ and one from M8.0+: According to “The 2013b Update of the M8-MSc predictions” (sent on Monday, February 17, 2014) each of the five earthquakes cast a failure-to-predict in our Test. Note that – (i) both the 01 April 2014 M8.2 – 94km NW of Iquique, Chili great earthquake and its significant 03 April 2014 M7.7 aftershock are missed by a TIP diagnosed in CI#162 at about 490 and 380 km, respectively; (ii) the M7.9 – 24 km SE of Little Sitkin Island, Alaska is another vivid example of a marginal failure due to discreteness of the M8 algorithm and the Test procedure: In the 2014b Update the last one score of the M8 functions in CI#101 now hosting was as required for a declaration of TIP but yet missing a pair, which it would get with an update on the 1st of June. One may say that the target event was expected with a repetition of the same score in the next semi-annual update but did appear just a bit earlier. In fact, in the 2014b Update on the 1st of July both scores degraded from the required to claim TIP due to the 10% rule for a function “anomaly” when getting equal integers at the level of 10th percentile (for the numbers of earthquakes of different size in a trailing time window): a random choice of one of the equal integers would result a TIP in CI#101 (ANDREANOF ISLANDS, ALEUTIAN IS.). Of course, these comments are not an excuse for “polishing” the M8-MSc Global Test statistics (which already are good enough as a proof of predictability of the great M8.0+ and significant M7.5+ earthquakes) but a possible insight for potential “shades of grey” improvements in a practical monitoring of the changing earthquake hazard in populated regions of special concern. 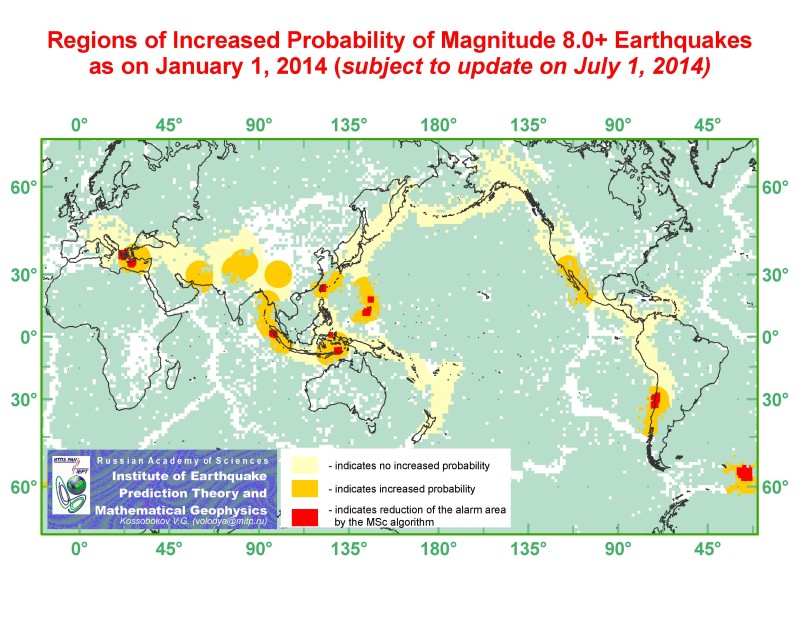